RedBubble is a fantastic site in terms of what it does - its ability to host so much artwork, and to sell it on to consumers. But some of the people on there in their groups are a little bit strange - it seems I upset someone there yesterday beyond any rational way I can comprehend. What the ...?

Anyway, I gave some new work up there, so here's a link: http://www.redbubble.com/people/davidabse/art/5794486-1-les-matelles-2-pic-saint-loup-source-du-lirou-buffy-acrylics-on-canvas . This is one of a couple of pictures of Les Matelles which will feature in the exhibition, open to the public from September 11th. The date may have other resonances for you (especially if you are from New York or Chile), but for me it's my (late) mother's birthday. She would have been 84. Here's some stuff about my mother: http://www.dannieabse.com/joan.html.

Anyway - here's the new poster for the exhibition. If anyone wants to know why it's in French (believe it or not someone did ask me this) it's because it's in France... 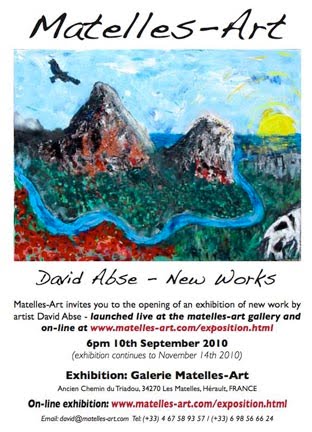 New works on line and other things 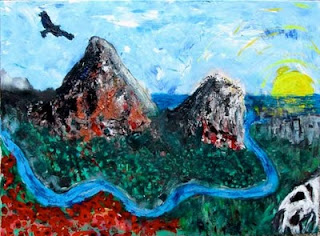 I had an entertaining moment (not) when in uploading some artwork earlier I temporarily disabled my whole website. Ooops. Everything ok now, and now new artworks on-line at www.matelles-art.com. As usual I have been updating stuff at RedBubble and getting some weird sort of enjoyment out of reading people's discussions and comments on various forums. If you look at RedBubble a lot you begin to realise that it's kind of cliquey, and there are groups of people who like to be in control of their RedBubble groups, and bestow their compliments and prizes to those artists they like best. Then some people get angry and argue. "Why was my painting not allowed in the 'Landscape Painting' group, when it's a landscape" one chap reasonably complained. "Ah, you see, it's a SEAscape, not a landscape" came the reply. "But that's a river" replied the artist "and behind the river is land" (He had a point). However he then went over the edge "If you don't accept this painting I'm never going to submit to this group again. I'm extremely upset and I now can't even LOOK at the painting." Hmmm. I'm beginning to wonder if he was actually taking the piss. You see, he's English and the Group is run by Americans and Aussies - and these particular people are VERY precious. Mind you, if he's not joking, so is he. They refused to let his work in (after an on-line meeting it seems) and laid down the law to anyone else who would dare submit a landscape with a BOAT in it, or even (shock, horror) a BUILDING. I do wonder why anyone would care. It's a great website because it works so well and allows you to showcase and sell your work, and it IS nice to get some sort of feedback. But really, it's not the be all and end all...
Posted by David Abse at 23:46 No comments:

Yeah, I added another one (make that 2)

Just like I said - take a look at http://www.absolutearts.com/portfolios/d/davidabse/.

And that link I gave before: Writers and Artists' is really good - entered my stuff in to other places too. We'll see what happens there.
Posted by David Abse at 17:47 No comments:

My work is non line at facebook, RedBubble, MySoti, ArtWanted, another one I've temporarily forgotten, and not least, my own website at www.matelles-art.com. If you look up artists websites on google, you can see the incredible number of 'websites for artists' - some offering 'free' sites (some advertising) some asking for money to host your information. It's a complete mess for all artists, and for anyone looking to find an artist of their work.

My personal favourite is RedBubble, because it's free (they'll sell your work and take a cut), and because it's simple to use. Uploading your work is easy, and it looks good. MySoti is a pain because it is harder to upload (and really they're a T shirt site) and their ability to supply promptly is not good, artwanted want an annual fee AND it's hard to upload..

So I took a look at 'Writers and Artists' and found there's EVEN more than I thought. Look out for my next new website - might as well upload everywhere!
Posted by David Abse at 15:54 No comments:

Hi, welcome to the Matelles-Art blog. Matelles-Art is a gallery, shop and atelier in the beautiful small medieval town of Les Matelles in the Hérault in the south of France - about 10 miles north of Montpellier.
View
Larger Map

I am doing this in English because it is too hard for me to write anything at length in french that makes sense. Also, I make sure the Matelles-Art Facebook page is always updated in french. In this blog I will explain what is happening with Matelles-Art, what new work is available, and any other news with regard to Matelles-art that I hope will inform and entertain. As a rule, you should know that latest works get updated pretty regularly at ,RedBubble. But I can't make announcements there, or anything else interesting. For the moment -just keep your diaries clear for September 10th, and re-visit this blog for more information.
Posted by David Abse at 12:29 No comments: