As previously recorded I have started using oil sticks more in my work. A whole batch I ordered from the SAA (Society of Art and Artists - or Strictly Amateur Arseholes) about 4 months ago arrived this week and this spurred me on to do this work. Some brighter colours and inspiration from still life. Not sure about titles - have changed them 3 times as I type this. Anyway the first picture is small - about30x20cm, the second picture I think is 80x60cm.
Meanwhile I received an email this evening from an art association here in France, inviting me to participate. Attached to the email was a file setting out the rules, terms and conditions etc. This being a long pieve of text I cut and paste the french straight into Google translate. Two things immediately stood out. The addres of the person sending the letter out was "impasse des rossignols" - you should know that an "impasse' is simply a road that leads nowhere - kind of a cul-de-sac(!) - and "rossignols" are nightingales - but Google translated what in english should be I guess "Nightingale Lane" as "Dead Nightingales". Even worse, elsewhere in the document there is a list of stuff that will automatically disqualify work, for example work delivred that isn't the same as on the application form, and, I guess reasonably, work "mal encadré" i.e. "badly framed" - but as Google prefers to translate: "Evil Box". The temptation to submit a painting of dead nightingales in an evil box is almost too much to resist.
Posted by David Abse at 01:03 1 comment:

The Parallax Art Fair turned out to be like nothing I've ever experienced before. A million artists. Ten billion people looking. Each artist with 5 square inches of space. Temperature under thew lights reaching 200ºc. Well if I'm going to exaggerate for effect I may as well go all the way. It wasn't so much the size of the wall space, which was as expected, but the incredibly limited viewing space - you couldn't back further away than 2 metres from a painting without bumping into another painting. That's if you didn't bump into 14 other people at the same time, or pass out under the lights. Interestingly the part I took part in was billed as "abstract" - but at least a quarter of the work being shown was figurative. Of those my favourite was Jonathan Alibone with his pervy ladybird-book-style watercolours - hilarious. Of the abstract artists I loved Marcello Scarselli whose paintings I really loved. I tried to convince his friend there looking after his space to do a swap for one of mine, but it was at this point he lost his ability to speak English. Shame.

So I have taken something else from him instead, as you can see in my latest paintings below:


I have extended my use of layers of colour done in various media - oil, acrylic, spray paint, and extended and clarified use of symbols. And I guess neatened things up a bit. The triptych was done differently to the other two triptychs I have done. In the first I joined the three canvases together after painting thewm. In the second I haven't joined them together at all, because I like them on the wall with a small gap between them. In this one they were joined together part way through the process - actually in a way at the start - because at the point I joined them they were three separate paintings, and I decided to make them just one painting with three canvases joined. Yet the fact of them being three separate canvases changed the way I painted. I liked this, so took the fourth painting I was working on while these were drying, and took the idea further by dividing on a single canvas. By four, as it was the fourth. This kind of makes sense to me anyway!

Anyway I'm quite pleased with this. A lot of work has gone into a small painting that looks like I churned it out in a few minutes.  It is only 22x33cm (L4 for those keeping count). Meanwhile I struggle on with a series of 4 paintings I can't quite get right, as reported in another blog entry using a lot of oil stick.

Secondly the Saatchi drawing competition thing is on line. I have two things to say about this: you get to vote between pictures - they call it a "match-up" - and the whole thing has a "hot or not" feel about it (!) - but actually "hot or not" would be better, because voting between two randomly selected pictures is odd, and will no doubt lead to some perverse results, because there's no "Jesus christ these are both fucking awful" button, or even a "actually I quite like both of these" button, which is a shame. There are some revolting drawing up there too - not just bad (there are plenty of them) but actually really tasteless and revolting, which leads you to vote along the lines of "I'll vote for that one because it is just bad, whereas the other one makes me want to rip my eyes out".  OOps just found the "Skip this" button. I feel a fool.

Enough of that, the key thing is actually to ensure you go on there and vote for my un-revolting picture here:
http://www.saatchionline.com/showdown/match/showdown/8/artist/192487
I need the votes - am currently only in 1075th position out of 2099!!

Finally - if you're in London later this week I hope to see you (as noted previously in this Blog) at the Parallax Art Fair.

Today is the last day of the Matelles-Art gallery. Everything comes down tomorrow and a few days later the gallery will be reborn as "Kitty's Tack Shop". A great place for all and sundry to buy horsey type things. That website will be running properly soon, we'll be selling through the shop and in markets and directly at equestrian centres, and those of you in the UK can buy stuff through the Kitty's Tack Shop Ebay Shop.

But as for Matelles-Art, it's all change. The gallery now exists on line here at the main matelles-art website - and in the next few days I'll improve it by giving size and media details and offering the opportunity to buy online - originals and prints. You can already buy t shirts.

My studio will continue, and I can still offer giclée printing at a very reasonable price (!). And every summer I'll turn the tack shop back into a gallery for a month. After all, this summer I've actually sold a few things.  Nearly paid the rent.

So I'll finish this post with some pictures of the gallery on its last day: 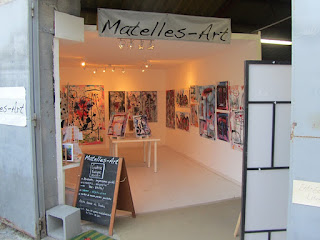 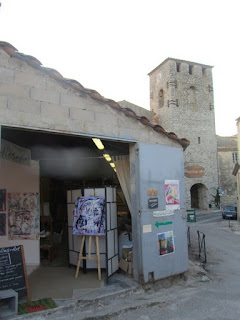 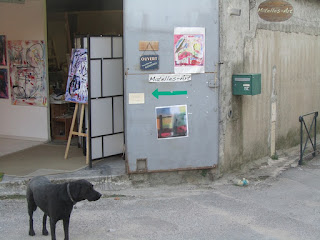 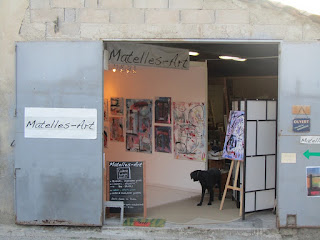 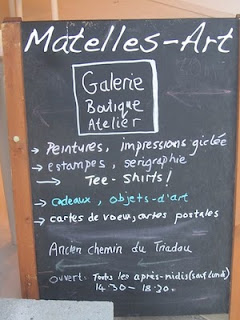 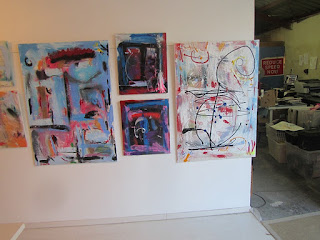 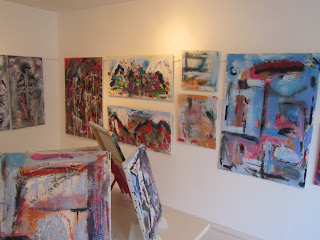 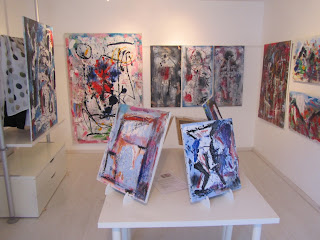 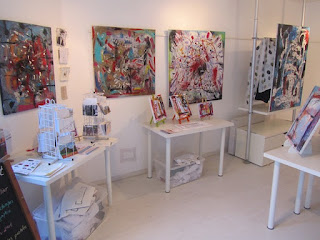 Losing myself in the crowd

A new painting. Continuing along the same lines - but putting more oil stick into the mix. This is smaller, too:  F8 (38x46cm). Another lyric-inspired title. I choose lyrics that link to the painting in my mind, not at random, in case you were wondering. This painting continues my abstract identity/symbolism theme, and I kind of like that the image has a "still life" feel about it. Anyone got the song? Answer below the painting*.