More iPad work. I will have to remember how to paint when I go to the Ganges 1900 event on Saturday - see details here . It's a fun festival where everyone in the town dresses up like it's 1900. All sorts of stuff going on, including artists painting in the street. One of those will be me, painting something appropriate, and dressed appropriately in smock and beret. This should be fun one way or another. There's free food and drink involved and prizes and stuff, and the festival is good fun whatever.

In the meantime here's some iPad stuff - all very relevant to the year 1900. Or maybe not:

I am a complete idiot

I often submit my work for competitions and opens and things. Paintings, drawings and stuff. I don't think I have the systems for it though. Maybe I ought to be more organised. Perhaps I should update my database or something. As I may have mentioned in an old post, earlier this year I got a painting accepted for an exhibition in London related to the Olympics. Stupidly, though, the painting I had submitted was enormous (180x120cm) and was going to cost me over 200€ to send. So I gave it a miss. Why I sent that one in I have no idea. I guess i assumed it wouldn't be selected. Now I have had four pictures accepted for an exhibition in Cheshire. Yay! Except ... er...which ones exactly? I haven't got a clue. I am hoping that my brain was vaguely in gear  (optimist) and I submitted teeny-tiny ones, or ones on paper or something intelligent like that - but since I didn't bloody write down which ones anywhere and the whole thing was done on an on-line form.... I'm kind of screwed. I have had to email them and admit my stupidity and say "Thank you. But which pics exactly?" To be slightly fairer to me (but only slightly, I really am an idiot) I get rejected so often I guess it doesn't feel worth writing them down (aaaaah), and considering I submitted four pictures the last thing I expected was for all of them to be accepted. In my most optimistic mood I would have imagined them writing back to me and saying
"we have accepted picture "a" and picture "b" but not....." So let me re-iterate.
I AM A COMPLETE DICK.

Meanwhile here are some more iPad pics I have done in the last couple of days. Actually I am hoping it's a set of iPad pics that I submitted. Easy to transport.


And the lovely people at the Electric Picture House have emailed me and I can see the good news: All iPad pics!! Yay!!

Drawing or sketching. Or something.

I have been sketching and drawing. What's the difference? Are they sketches because they're in a sketchbook? No, otherwise my sketches on loose paper would be paperings.  And what if they're digital? Aarrgh! And what if I use colour? Well they are on paper and iPad, and even a bit on canvas. I need to get started on some painting before I forget how. At the moment I am thinking, sketching out a kind of town landscape with cats. But who knows what that will turn into? In the meantime here are some of those sketches. Or drawings.

The weather is hot.  The village fête is in full swing. So instead of "proper" paintings I am churning out endless iPad paintings. I am getting technically more proficient with "Brushes" but I am unsure whether this is improving my output. But have a look. If you could tell how my mind is working through looking at these you might think I have gone crazy. But it's damn hot is my excuse.

No I don't know why. EWhy am I doing some "cutesy" pics combined with some bonkers pics. No idea. Hmm. No eye deer. There's a thought.

Took a trip up to Lac du Salagou this morning to a quiet spot where the dog is allowed to play and swim. She loves water so much, and the weather is so hot it seems cruel to deprive her of opportunities to swim. Salagou is a strange place, an artificial lake that supplies the water for a lot of the area, surrounded by round hills - some of which are clearly slag heaps, and some natural. Parts of the lake (which is huge) are touristy, but there are some quieter spots like this one. 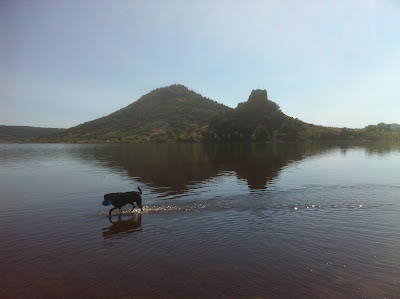 Later we came home, and i did some more iPad paintings. Slightly obsessed by these at the moment. One of horses, one of a white bull in the desert (chased there after mauling Tommy Steele to death), one of Buffy by the lake, one of a duck and one of some Rats - another Syd Barrett inspired one. Avoiding the Effervescing Elephant at the moment - done it before, many years ago.

I decided I must prevaricate a bit less and must pick up a pen/brush etc today. So I started with a drawing of my daughter's new horse, Gump.. She was happy with it, and it caused my wife to repeat her entreaties for me to try and earn my living doing horse portraits. *sigh*

Then I picked up a watercolour pad and did some ink painting. A landscape (Pic Saint Loup Again), and then a thing which is called "A woman's love of her horse" and finally an abstract thing (I can see a camel wearing a baseball cap backwards through a window). Well these are all ok I guess.

But during all this I was (as usual) listening to music. Suddenly Syd Barrett came on and for some reason this made me pick up my iPad. I'm much happier with these.

Abstract - what can you see?

Sometimes when you look at an abstract expressionist painting you can see things there that probably aren't intended to be there. It's like looking at clouds and picking out shapes. Different people see different things: minds want to identify things in shapes that mean something. I always remember the Peanuts cartoon where Lucy, Charlie Brown and Linus are lying on their backs looking at clouds: 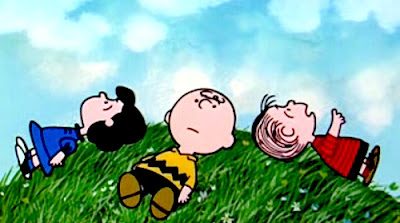 Lucy: Aren’t the clouds beautiful? They look like big balls of cotton. I could just lie here all day and watch them drift by. If you use your imagination, you can see lots of things in the cloud’s formations. What do you think you see, Linus?
Linus: Well, those clouds up there look to me look like the map of the British Honduras on the Caribbean. That cloud up there looks a little like the profile of Thomas Eakins, the famous painter and sculptor. And that group of clouds over theregives me the impression of the Stoning of Stephen. I can see the Apostle Paul standing there to one side.
Lucy: Uh huh. That’s very good. What do you see in the clouds, Charlie Brown?

Charlie Brown: Well… I was going to say I saw a duckie and a horsie, but I changed my mind.


You could say that they are both right - a person sees what they see. Or you could say that they are both wrong - they are both looking at clouds, nothing more, nothing less. How do artists feel about this? Some artists seem to mind if you look at their pictures and see things that "aren't there", especially if it isn't what the artist intended. After all if your abstract piece was intended as a polemic against the international domination by the christian right, or a statement of how your sexuality tends to define you I can imagine it could be a bit annoying if someone says they see "a duckie and a horsie". On the other hand abstract expressionist painting often comes from "within" - and artists are often surprised by what ends up on the canvas themselves. Which is why a number of attempts by critics to explain abstract art often sound a lot like Linus, and people looking at abstract art feel intimidated. After all they don't see all that pretentious "intellectual" crap, they see the "duckie and the horse".

Anyway, here's another iPad picture - what do you see? 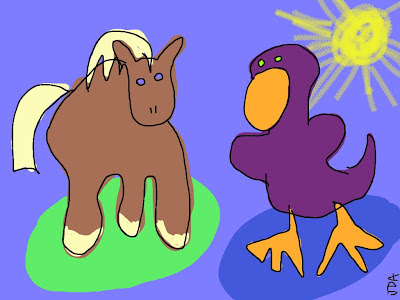 In other news my website www.davidabse.com has been updated - now with up to date pictures, front page slideshow and prices and sizes of all works listed. Take a look
Posted by David Abse at 19:34 No comments: