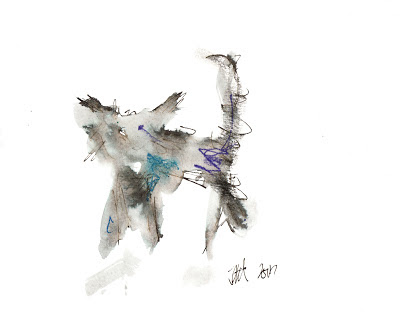 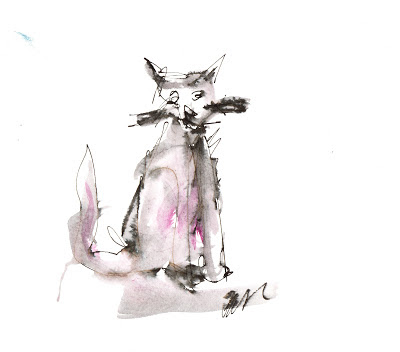 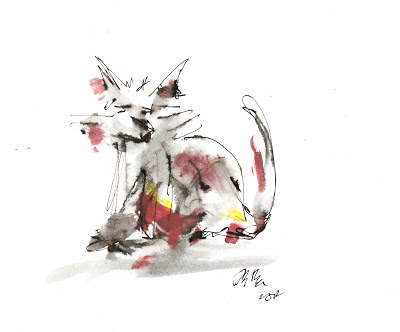 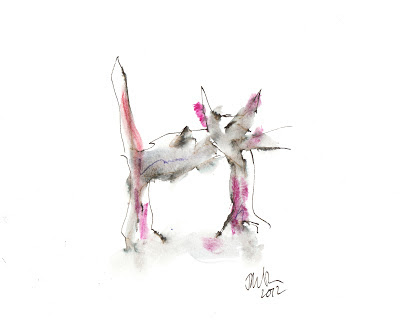 The rain is coming down hard. Today is particularly bad, but it has rained a lot recently. Although that's not entirely true - two days ago I was driving around with the roof down on my car, the sun was shining and the temperature recorded outside the pharmacy was 30°c. But summer is well and truly over. When I take the dog out at 7am I have to take a torch, and am disturbed to find the ground where we play frisbee has been dug up by wild boar. This morning though we couldn't even get to the field - the river Derridière was running and no hope of crossing it for me. The dog didn't mind - we played in the river instead.

This means that I am not out drawing, and actually am finding it hard to motivate myself out of my nice warm bed. It usually takes a ginger cat miaowing in my ear to get me up.

I have found some time to do some painting, and some iPad pics, some of which I will share with you here.

Red Flag and Black Flag - communism and anarchism. But in many ways these are paintings about painting. I have reverted to using entirely acrylic paints. It's much easier in the small space I am painting ion now. I like the textures I have made by using different palette knives. Scraping paint off gives different effects, and using masking tape to create geometrical-type shapes gives an impression of layers I like. Lots of things inspired me whilst painting. I spent some time looking at other painters' work, including Hodgkin and Hoyland, and Jim Dine. Which made me think of one of my old printmaking tutors at college, Don Bessant, who died young in the 1990s - as did two other of my printmaking tutors, Geoff Smith and Jim Chappin - very sad, and reminds me that painting with water soluble stuff is good health and safety practice - and reminds me of how sensible I was to give up smoking 8 years ago. So I googled Don and found galleries selling his prints - which is nice, and found that Wolverhampton had opened a gallery in his name, which is also nice. And found loads of pictures of him as a young man with Julie Christie - whom he dated in the 60s. Down the pub, fag in the corner of his mouth, Don would reminisce about those days over a pint. Now I'm reminiscing about him.

So after such serious research it's nice to pick up the iPad and do some more silly drawings. I usually use "Brushes" for these, and  recently was pleased to learn that a new version - Brushes 3 (what happened to Brushes 2 is a mystery) - is out. Unfortunately it has mutated into something that doesn't interest me. An iPad app aimed at people who want to produce iPad paintings that look like they have been done on paper or canvas - in other words that don't look like they were done on an iPad. I love the simplicity of the original Brushes, and don't really see the point of the new app - there are already similar apps out there - the best of which (if you're interested) is "Procreate". To show you what I mean, here are two recent Brushes pictures:


And here's one I made with Procreate:


Nothing wrong with it - it looks like an ink drawing of a horse. But you know what? I think I prefer to do ink drawings of horses on paper - with a pen and ink, like this:

I like having music on while I paint. I choose different playlists depending on my mood. I'm sure this has in influence on what I paint. It certainly influences the titles I choose for the paintings created whilst listening. So here are four new paintings. They have been painted simultaneously, all with acrylics only - oils are too difficult in my current space, and I can't use spray paints. Actually not entirely true - one of them has some oil stick on it. 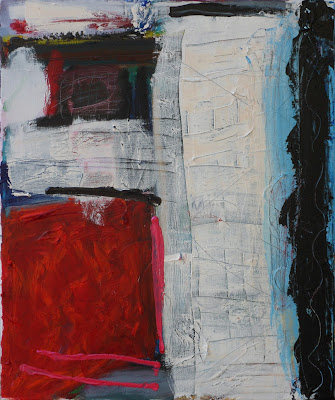 They are all "15F" 54x65cm - which feels like a good size to be working on in the space I'm in. I could probably go a bit larger. When I've finished with this job-lot of canvases I bought at this size I may have a go at something bigger. I'll have to see what's on offer. Am getting low on red paint, which could be disastrous. 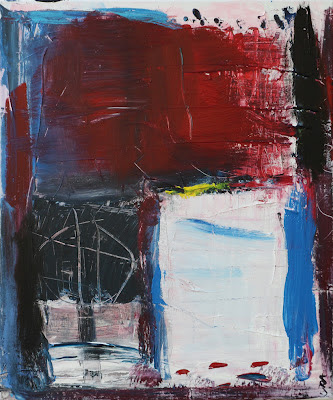 This group of abstracts have been influenced by a number of things (apart from the music). I'm still very interested in the golden ratio/Phi, as well as the physical environment outside my window, which mainly consists of amazing medieval stone buildings. 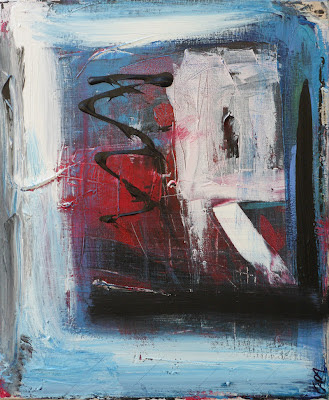 I'm still fascinated by expressing concepts of identity within paintings too. I find it interesting that when painting you are expressing yourself: but each painting isn't the same, because you are never the same. And it's not entirely caused by a change of track from Public Image Limited to Prince Buster. 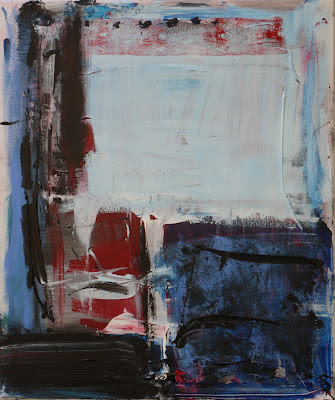 The act of painting is interesting in itself too. It is easy to get dragged in by different marks. I like the textures caused by using different brushes, paints and palette knives (and fingers too). But I am controlling things a bit more simply because of the lack of space.

And yet all of this seems quite self-indulgent - which I guess it is - I suppose all painting is to some extent self-indulgent and this is kind of necessary to the process.

Meanwhile my lovely Barchetta appears to be dead - or at least badly injured;. And it seems sensible to be looking for a new car, which I am doing. Am contemplating driving a Right Hand car in france simply because the cost is so much lower. Dammit I need to sell some of these paintings to pay for a new car!!
Posted by David Abse at 18:00 No comments: