Trotsky - whatever happened to our heroes?

I had to get around to Russia sooner or later, and Trotsky's exile in Mexico and his interesting looks make him a good subject. What's the difference between Stalin and Lenin's views and Trotsky's? Put simply Trotsky believed in internationalism, not the concentration of communism in one state - the Soviet Union. Trotskyists believe that his views were more reflective of Marx's. Leninists don't . Meh. As Bakunin said- A dictatorship of the proletariat is still a dictatorship. Stalin was the real problem, as he ended up believing in the dictatorship of Stalin. Simplistic? Moi? Stalin purges Trotskyites in the Soviet Union, and eventually murdered Trotsky. As the Stranglers once noted "He got an icepick that made his ears burn".

It's been a long time... More revolutionary portraits and other stuff

It's been a long time since I've updated the blog. Lots of stuff has happened since then, and I have done lots of work of different types, quality etcetera. I have managed to keep my main website at davidabse.com up to date so for missing artworks take a look there! Mainly I have continued with my portrait series of revolutionaries. Here are some them: 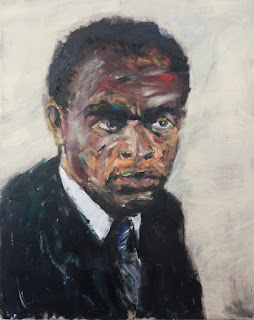 This is Franz Fanon. A very interesting man. He was born in Martinique and was therefore French. He trained as a doctor became a psychiatrist, and is noted for his writing on philosophy, politics and race. And of course as a revolutionary and a Marxist. He swapped sides in the Algerian War of Independence and became a member of the Algerian Liberation Front. He worked on the front line of the war supporting wounded and traumatised Algerians. His written work became hugely influential, particularly his analysis of the effects of colonialism black people. It's very hard to simplify his life down to one paragraph, but here's a quote from leading African scholar and philosopher Lewis R. Gordon: "Fanon's contributions to the history of ideas are manifold. He is influential not only because of the originality of his thought but also because of the astuteness of his criticisms. He developed a profound social existential analysis of antiblack racism, which led him to identify conditions of skewed rationality and reason in contemporary discourses on the human being" 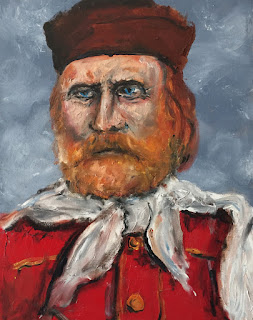 This is Giuseppe Garibaldi, 19th century revolutionary, mainly known for his influential involvement in the unification of Italy, but also because of his revolutionary activities in South America and France. He was born in Nice (then part of Piedmont) in 1807. He worked as a merchant seaman, and as a young man joined the then illegal "Young Italy" movement founded by another Italian revolutionary Giuseppe Mazzini. After being condemned to death for his anti-Austrian revolutionary activities, Garibaldi spent many years in exile supporting revolutions across the Atlantic, always looking, however to return home and fight for the unification of Italy.  He loathed the dominance of the Catholic church and what he saw as its misuse of power in Italy and in other latin countries. He famously wrote "God didn't create man, man created god". His ideas for his time were revolutionary, and he supported always increased rights for ordinary people. 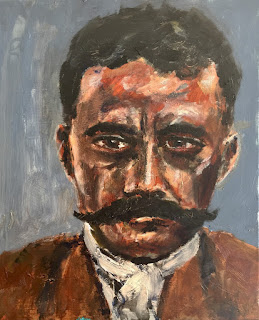 Emiliano Zapata Salazar 8 August 1879 – 10 April 1919) was a leading figure in the Mexican Revolution, the main leader of the peasant revolution in the state of Morelos, and the inspiration of the agrarian movement called Zapatismo. He fought for the freedom of ordinary Mexican people from the dictatorship of Porfirio Diaz, which had last for 35 years, and caused immense poverty for agrarian workers. He fought all his life for land reforms that would give ordinary people control over their land and lives, and whilst he succeeded in getting these reforms implemented in Morelos, Mexico deteriorated into a series of battles, wars and disputes. Series of governments refused to issue reforms that revolutionaries had fought for, and Zapata viewed that a number of his contemporaries sold out, so he had little option but to keep fighting. Government forces killed Zapata eventually by tricking him to come to a meeting, and then gunning him down.