Back on the road to Morocco

Like most people I don't always read the instructions. So when I painted that picture for the Morocco competition I guess I should have read the small print. It turns out there are two stages to this competition - on the plus side they really are giving out 3 holidays (for 2) to the best 3 paintings, and hundreds of euros worth of art materials to the next six placing. And the good news is I made it through to stage 2  - the last 45 - so have a 1 in 5 chance of winning something (not another bloody Blue Peter badge). The bad news is I've got to go to Bordeaux to take part - all the action takes place next Saturday. And ity's a long way - 400km. I've got to spend three and a half hours (each way) on a train from Narbonne to Bordeaux to take part in a four-hour painting competition. So that's 7 hours on a train, 110€ on train tickets, plus a taxi in Bordeaux and parking in Narbonne all day interspersed with four hours of painting in a giant art shop in Bordeaux. And I'll miss the vernissage for the vines/grapes/wine show that I delivered my picture for today. Damn. I hate missing free wine.

Anyway I've decided to go for it (what the hell) and am practicing and preparing for it - previous "paint on the day" competitions have been a disaster for me, so I want to be prepared. In that light I've been thinking about Morocco and have been working on themes that I can connect to. Some time in the past my ancestor Abses made their way from North Africa to Spain, so I guess I have some cultural links there. Which is interesting . I have researched and found some interesting old symbols I like, including a double-thumbed clenched fist with an eye in the middle, that is remarkably similar to Hunter S. Thompson's Gonzo logo (no thunderbolt, but you can't have everything), and I have been experimenting with a warmer, north African palette.

This is what I've got so far:

Dualism - The Ghost in The Machine

Déscartes believed that our mind was separate from our physical being, that our thoughts, emotions, ideas etc were created in a "mind" that was somehow separate from our body and our brain. He described this as "dualism". The idea originally developed in the 17th century was generally accepted by philosophers for 300 years. It wasn't until Gilbert Ryle dismissed the idea as "The Ghost within the Machine" - the mind within the body.

Arthur Koestler then wrote a book taking Ryle's ideas: "The Ghost in the Machine". Again from Wikipedia:


The Ghost in the Machine is a non-fiction work in philosophical psychology written by Arthur Koestler and published in 1967. The title is a phrase coined by the Oxford philosopher Gilbert Ryle to describe the Cartesian dualist account of the mind–body relationship. Koestler shares with Ryle the view that the mind of a person is not an independent non-material entity, temporarily inhabiting and governing the body. One of the book's central concepts is that as the human brain evolved, it retained and built upon earlier, more primitive brain structures. The work attempts to explain humanity's tendency towards self-destruction in terms of brain structure, philosophies, and its overarching, cyclical political–historical dynamics, reaching the height of its potential in the nuclear arms arena.

But the concept of dualism has been widely exploited in art - by musicians, writers and artists. It is hard to equate thought/emotion/idea as the (mere?) product of a physical act. Some wires buzzing in your head. And as I have noted here and elsewhere, sometimes it can be hard to equate the fact there is only ONE mind in (working?) your body. And then there's the sub-conscious...

Sometimes you're not yourself, and you know it. Stress can cause you to feel odd, and to act in ways that don't feel like you - you can react irrationally, your emotions can leap all over the place - anger, sadness, irritation, exhaustion. Irrational - no obvious cause - absurd, inappropriate feelings and behaviour. But if that's not you, who is it? It can be damn confusing, unbalancing.

There's a local competition/expo that I thought I'd enter while I was in the landscape painting mood, for paintings relating to wine and vines. Still going for another Blue Peter badge - whatever happens, in the worst case scenario I get an invite to the vernissage, which means a free drink and bite to eat. As for the vines in the painting, this is the good stuff. I plan on testing the rosé this afternoon. 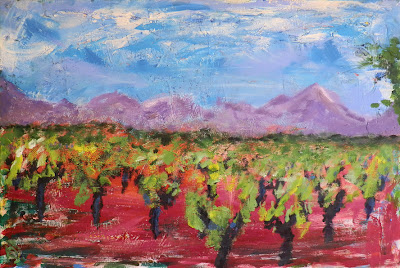 We're off on the road to Morocco

When I was a kid I loved watching those "Road" movies with Bob Hope, Bing Crosby and Dorothy Lamour. Not as much as I loved the Marx brothers, but I thought Bob Hope was great. No really, I did. But then I was only 5, and didn't know what an awful right wing git Bob Hope was - besides, my grandmother would always happily tell me: "He's Welsh you know. His mother was from Barry". Then Rolf Harris would come on the telly and she'd say "He's Welsh, you know, his mother comes from Merthyr", and then Shirley Bassey would come on... Anyway, you get the idea. Groucho Marx didn't have a mother from Barry or Merthyr, but he was a nice Jewish boy, so he was alright too. But none of this has got anything to do with my newest painting, as you can see below.

It's not Barry or even Porthcawl, but it looks like a nice beach.

Not my normal kind of thing I suppose,  but I thought I'd have a go at a competition being run by Boesner and Canson (art and paper suppliers here in France). They are offering 1000s of euros worth of art materials plus 3 holidays in Morocco. Mind you the last thing I won for any of my paintings was a Blue Peter badge. No, that wasn't recently, it was for a painting I did of a fire engine in about 1966.

I met Peter Purves once - at a punk gig in Leicester Square. No I don't know why he was there either. Lovely chap though: mother comes from from Llantwit Major. Or maybe not. Made that bit up. Everything else is true, obviously.

My wife, the Old Nag, has long encouraged me to draw horses. I'm not a great lover of horses and have no interest in riding them after trying age 10, but I have met one or two that I like recently, and have drawn them. Particularly Gump, May and Geegee. The Old Nag thought I might be able to flog people drawings of their horses, so I did some last year: but she gave me such negative feedback I never even bothered to scan most of them. "They don't have the life and the character of the ones you did of May and Gump and Geegee": she said. Oh well... 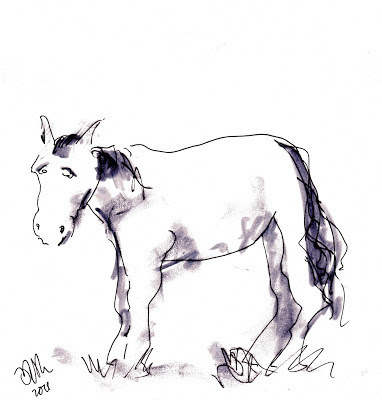 However, recently my drawings were appreciated by horse aficionado and boss of the local Apaloosa ranch, Camille Auguste - so i decided to scan my drawings and put them up for sale on my website. There are a couple below, but you can see more at my website at the horses page: http://www.davidabse.com/portfolio/horses/index.html. So if you're a pony fancier - take a look! 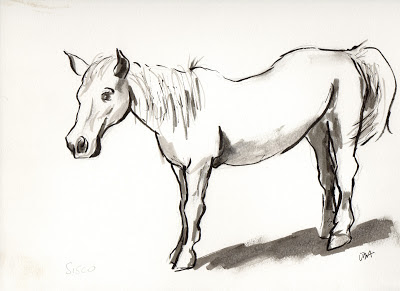