Not getting much right on canvas at the moment - so am now faced with three blank canvases having painted white gesso over recent efforts (bye bye Millau Bridge). In the meantime, here's some more iPad sketches I've been doing.
Posted by David Abse at 09:52 No comments:

Widely regarded as one of the  architectural and engineering masterpieces of the modern age, the Millau bridge is only an hour and a half from where I live. The bridge is part of the A75 motorway - which has to be the most pleasant motorway I have ever driven on, which goes from Beziers in the south to Clermont Ferrands in the..er..not quite so south. The views all the way along the motorway are stunning - a lot of the journey you are driving on a road over 1000 metres high, with amazing views across the Ardèche and south. At Millau bridge everyone stops and takes photos. Me included.

Anyway, here's a painting, done from one of my photos, not on site.
Oils on canvas, 80x60cm. Not too sure about this style - feels like I'm stepping back a few paces. Going to have to think about this. Not sure how long this painting will last (I've already painted over another one to do it).
Posted by David Abse at 18:26 No comments:

Being able to see: a useful talent for painters and goalkeepers?

How important is eyesight to painting? Seems like kind of a ridiculous question, I agree. But what do  we actually mean by ‘seeing’ when it comes to painting, when it comes to appreciating things visual? When I was young my dad used to say that I would appreciate ‘views’ more when I was older. And by this I guess he meant that I would be less distracted by other things - I wouldn’t be more interested in whatever game I was playing, and would be able to give a ‘view’ the time and appreciation it deserved. 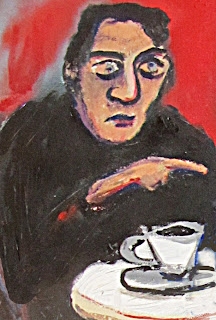 When I was at art school I remember one or two teachers telling us that we needed to learn how to ‘see’.  What they meant was the ability to visually interpret what is before us - see all colours, shapes, light, shade, perspective, so that we would be able to turn all this into a 2 dimensional image on paper. I think broadly this is true: you can’t draw, you can’t paint, unless you learn how to see, learn how to look at things. Then to make a painting, a satisfying  picture, you have to see a composition. To quote what apparently is a chinese proverb: “First I saw the mountains in the painting, then I saw the painting in the mountains”. And to quote John Ruskin: “You do not see with the lens of the eye ... but you see with the soul of the eye”. So there is more to “seeing” than eyesight.
In fact, what is very interesting is that historically many of the world’s greatest paintings were painted by artists reportedly with faulty eyesight. Included in this list are Degas, Monet, Kandinsky, Rembrandt, El Greco, Goya, Renoir and probably others. Margaret Livingstone, a professor of neurobiology at Harvard, has undertaken a study into the eyesight of artists, and has discovered that established artists are more likely to have astigmatisms than the general population. See http://www.janelleweaver.com/resources/colloq2.pdf for more info. In general she concludes that artists generally have poor depth of vision, which may explain the lack of tennis player painters, whilst simultaneously explaining the multitudinous goalkeeping errors of David James.
Eyesight must somehow influence what artists paint. Degas’ paintings certainly became ‘vaguer’ (and better) as his eyesight faded, and the same could be said about Monet. On the other hand it could have just been that they became better painters the older they got. Who knows what causes a painter to make a great painting. Would Van Gogh have painted as well if he had undertaken psychiatric treatment? Would Monet have been a worse painter if he’d had correctional eye surgery? Incidentally have you noticed that in recent ads for correctional eye surgery the person advertising the surgery doesn’t blink. At all. Weird - clearly he’s an alien.
For me, I know my eyesight has become worse the older I get. I have always been red/green colour blind, and my eyesight has deteriorated in the last ten years or so: I am shortsighted and astigmatic. And I always paint and draw without my glasses on, only putting them on to check how the painting looks at various points. Sometimes I am pleasantly surprised. Sometimes not. But I know how I see is effected by my eyesight, but my paintings are equally influenced by other physical and non-physical factors.
So to sum up: it is quite clear that there are a great many referees who would make seriously good painters.

That's the title I've decided is appropriate for this picture, another flower painting, making four in this particular series. i don't count the first one as part of the series because it's a bit different - if nothing else, it's a different size. Like the others this is 38x55cm.
That's definitely the last in this particular series because I've run out of canvases and stretchers that size. Not sure what's next. Exciting isn't it? No? Well it is for me!

I 'm not sure if there are any more of these in me. It kind of depends on the weather, which at the moment continues to be lousy. We are promised some sun for tomorrow and I have in turn promised to help my wife build some kind of horse feeder-thing, so won't have any or very much time in the studio. Let's see what happens next week. More flowers? Back to abstracts? Somewhere/thing else entirely? Anyway, these two paintings, the same size as the last flower oil painting - 10P  (That's not the price) - or 55x38cm, also inspired by Dyf - the catalogue is still lying around here. Mind you so is a catalogue of some awful Italian sculptor called Antonio Manca, and for some reason I am not inspired to paint Jesus impaled on a red tree. Weird that.

Flowers and oils - I'm coming over all traditional - ooh er

So here's my latest painting - which instead of being an expressive acrylic is oils on canvas. And it'\s flowers in a vase again. Autumn flowers this time. There is a very straightforward explanation for this and an influence particularly for this one. I ordered oil sticks from the Society of Amateurs and Assholes months ago, and they finally arrived last week. My membership expired in the meantime and given the amateurish crap service I got from them I don't think I'll bother to renew. Although there might be some financial advantages. I'll have to think about it. Anyway now I've got these oil sticks the opportunity to play with them is irresistible.Meanwhile the weather is unbelievably appalling here in the Languedoc - endless rain, flooding rivers, cold, winds. Bloody awful. Normally I have my studio doors open all year round, but at the moment they are shut, to keep out the wind and the rain, and by doing so I have removed all natural light, and all of this is influencing my painting . Flowers seem to be a reasonable response to crap weather, lousy light etc. But I don't have any flowers or vases in my studio. I do however still have some of the stuff my late aunt left, including an old Marcel Dyf catalogue. I  am not a special fan of his paintings (see more here) they're good, but not really my kind of thing - but he was damn good at painting flowers. And he made a lot of money painting them. Hmmm.

Today's effort is oil stick on canvas. I'm really enjoying using oil sticks and using my fingers - yes it IS just like nursery school without any health and safety protection. No idea where the flowers come from.
Posted by David Abse at 17:57 No comments:

When I was in new york earlier this year it was the day before the launch of the iPad 2, so they were selling iPads with 100$ off. I couldn't resist this and bought one. Since then I have used it for various things - playing games, collecting my emails, looking at stuff on the net, typing, and also painting. I have two programmes - Sketchbook pro, which I installed whilst still in New York, and this week, on recommendation of Kevin at L'Herault Art, I installed Brushes - which probably slightly better than Sketchbook in that it feels more natural to use. Don't ask me why, it just does. Anyway, here are some of the results - sorry about the layout - Blogger does some odd things sometimes:

Or something. New painting, mixing media again - oil sticks and acrylic paint. One of the reasons I like oil sticks is the way i can paint with my fingers quite easily with them. But this does cause a problem with the keyboard and the mouse afterwards.