Triptych: a new painting - and some art history too! 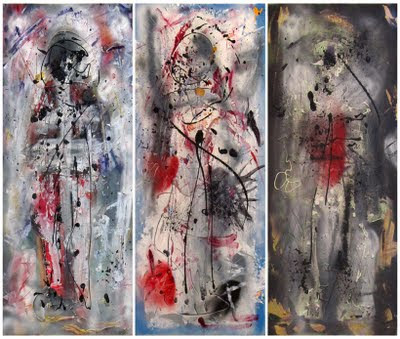 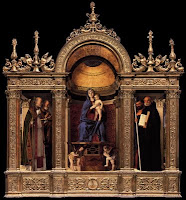 I have been working on this triptych for the past week or so. The idea has been something in my head for a while. I produced a triptych last year with the title: "There is colour there is light there is no god but that's alright" - mainly because I liked the idea of a triptych, but was uncomfortable with the religious history in regard to triptychs. I know there are non-religious triptychs, but there is no escaping that is their history. 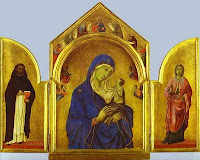 As an atheist, I have no interest in portraying religious imagery - and yet I would be an idiot to deny the importance of religious imagery in art. In fact, some of my favourite paintings have religious inspiration - or at least, subject matter - as that's what the artist was paid to paint. For example I love Bellini's triptych in the Frari in Venice, and Duccio's in the National Gallery in London. 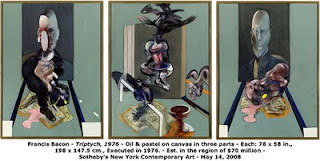 And then there's Francis Bacon: the modern master of the triptych. Without question Bacon was influenced by his early religious upbringing, but as he grew up and older, his subject matter reflected more and more his life, his sexuality and his dependence on alcohol.

So what does this triptych say about me? I'm struggling with a title, but the painting (like some others I have done recently) is about the different roles you/I/one carry/carries out. Father, son, husband, artist, boss, client, patient, leader, follower, aggressor, victim... etc. Different but the same. For a little while the picture involved different hats, literally, but that got painted over, as did obvious references to age. So I think the title is "Identities". How does that sound and fit?
Posted by David Abse at 18:56