And there goes another one...

I'm working on a big painting at the moment. P100 in french style =  165x114 cm = 45x65 inches. Which means I can work on smaller stuff at the same time - whilst waiting for paint to dry. On which subject it's weird at the moment because of the heat, which is encouraging me to combine and mix media. Everything is melting and liquify, but dries quicker on canvas. But oils still take ages to dry of course, which I can't get used to (I've only used them for about 30 years...). Anyway, here's a quick one on paper in acrylics,

The Wisdom of Cats

"I have studied many philosophers and many cats. The wisdom of cats is infinitely superior." - Hippolyte Taine
So this is what happened to the "Street Life" canvas I was working on - much improved painting I think, and much improved title. If you want to know more about Hippolyte Taine look at this on Wikipedia: http://en.wikipedia.org/wiki/Hippolyte_Taine
Posted by David Abse at 18:34 No comments:

A couple of new ones

It is so hot painting, even with my shirt off and a fan blasting away at me. It also effects the texture and drying times of the paint. So here are two different paintings, using different mixed media. The first is a mix of acrylics, spray acrylic, pen acrylic, acrylic ink and acrylic paint on canvas. The second is on paper (for oils) and is painted with oils - paint and sticks plus a blob or two of acrylic.

I'm not sure about the first - it may need more work. I kind of like the simplicity in one way, but in other ways it just doesn't look finished. I guess I'll have another look tomorrow. Now it's time to open a beer and cook dinner.

Get your T Shirt here: 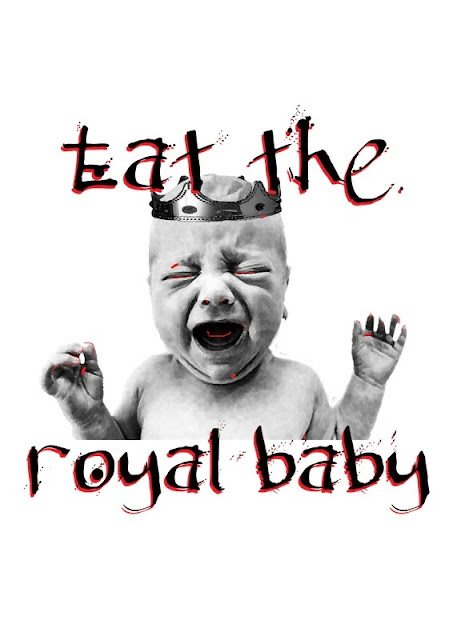 Saatchi - my work no longer on his site

Given his pro-Tory Thatcher-supporting history, I always felt a bit uncomfortable having my work on Saatchi's website, but then again, he's always promoted and supported art. Now though I think it's enough, and I have removed my work from his site. I have no wish to have my work associated with a man who (allegedly) physically abuses women. Just as I did with RedBubble when they took a stand defending apparent Nazi sympathisers. I am being slightly careful with my words because I can't afford to be sued, obviously. I'm a broke artists unlike millionaires Saatchi and co. He can't sue me for calling him a millionaire, can he? Can he sue me for calling him a fuckwit? Don't think so.
Posted by David Abse at 22:44 No comments:


So off I went yesterday morning to Bordeaux. There was no train until 9am, and the last one back was due to leave at 5.30pm, so I was looking at a day of 7 hours on a train and 4 hours painting. Mad, but what the hell - why not? The journey was on an old French intercity train - similar to the ones in the UK, except in the Uk they're the best you can get. In France these really are the poor relations of the TGV. If this had been a TGV the journey would have been at least an hour less each way, but the journey was comfortable enough, via Carcassonne and Toulouse and a couple of other places I've never heard of. To my relief the train actually arrived slightly early, so I made it to the Boesner shop - venue for the concours (competition) with some time to spare - enough to eat a merguez sandwich and a glass of cold white wine - extremely desirable on the hottest day of the year so far - around 38ºc (that's just over 100ºf in old money). Some guy played music on an electric keyboard, singing along in amusing english and the event kicked off. There were about 20 contestants there, and we were each given a 1m square canvas (or a piece of paper as one person chose) plus a table, easel and a packet of basic paints (acrylics - since it's an acrylic painting competition), as well as a goody bag featuring a canvas art bag, various catalogues, some spray paints and a sketchbook. We had been forearmed with info, so knew to bring other materials - paint, brushes etc - that we needed. I plugged in my iPod and got painting. We all were obliged to stick to the theme  "Morocco", but that was pretty much where similarities ended. Having done a couple of concours before i was better prepared than I had been before, and pretty much knew what I was going to paint - and had some sketches with me I had done of symbols, shapes etc, and some colour notes. One or two other contestants worked similarly, but most I discovered were painting from photographs. Anyway, below are some photos of the concours, and you can see the variety of styles: 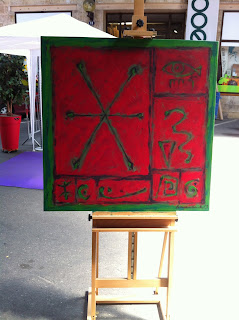 This guy used similar symbols to me - we'd both done the same internet research. His colours were based on the Moroccan flag. He was second to finish. 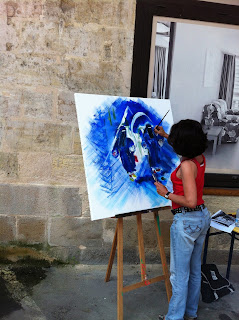 This woman painting below looked like she might not finish in time. There was only about 30 minutes left at this point. 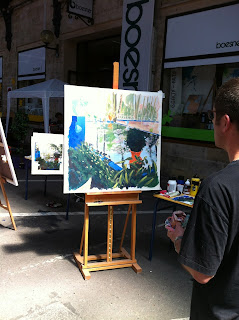 This was the man next to me - he painted a garden picture - Not sure, but I guess a Moroccan garden. 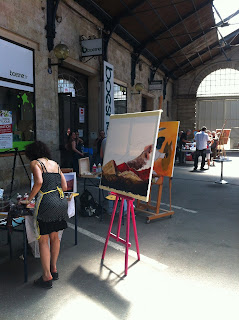 This woman use a strange acrylic painting style - her work seemed to resemble a mix of charcoal and watercolour, but was all done in acrylic. I'm not sure why. 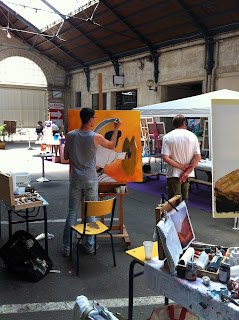 At first I thought this person's use of colour was interestiung - similar to mine, obviously(!). But the painting turned into a strange portrait of a man waving a sabre. Hmmm. A bit stereotypical, no? 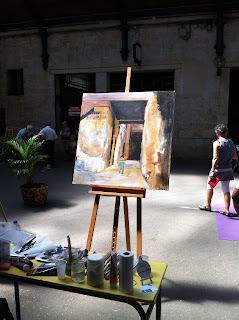 I really like this painting - the doorway and walls and shadows are really well painted, and it's a great composition and use of colour. But she completely ruined the painting by painting the little boy at the centre of the image. I realised then it was entirely copied from a very good photograph. But where is her artistic license? The boy works in the photo because he's really there. In the painting it looks contrived (and not well painted). 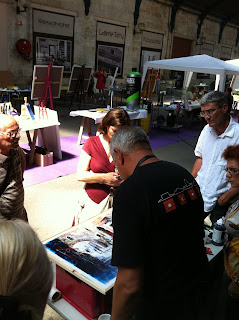 This guy had a permanent entourage around him as he painted onto paper. Is he famous? I don't know. 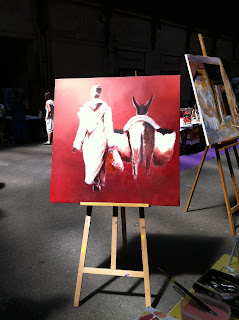 I like the colours in this painting, but the subject matter is a bit clichéd and the donkey appears to be floating in space. Normally I would say that was a good thing, but in this case it just appears to be wrong. 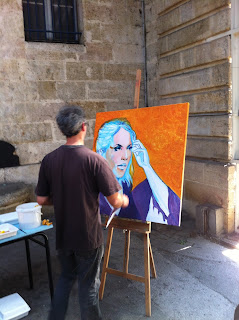 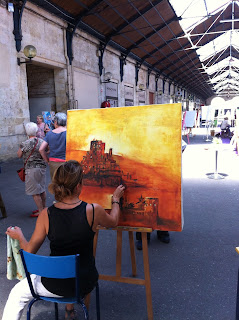 Is this going to be the winner? Colours, composition, subject matter? She's got it all going here, plus an interesting style and use of brush strokes. 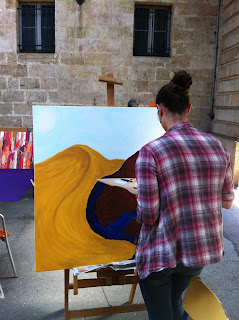 This woman looked like she might not finish, too. You can see the desert here, but not the fact that that it doubles for a woman's hair. Not sure. Nor was she I think, she seemed to be getting more pissed off as time went by. 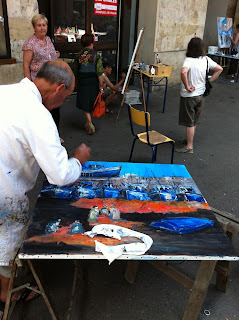 This guy in his lab coat and glasses looked like he was a scientist, but he turned out to be a boat painter. A Moroccan port? I guess so. 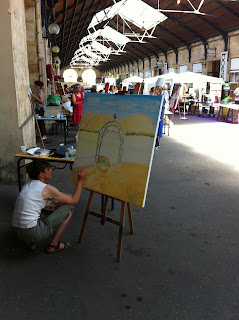 Not sure I get this at all. A big "Boesner" sign on a garden trellis out in the middle of the desert. 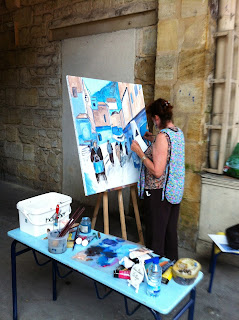 Well executed reproduction of a photograph. 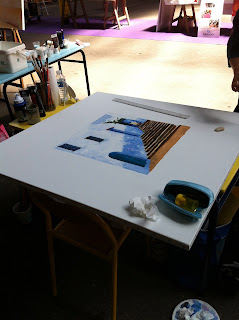 Even better executed reproduction of a photograph. But why paint a picture30x40 cm in the middle of a 1 metre square canvas? I don't get it. 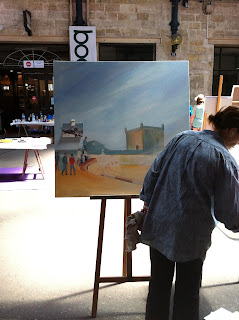 This woman seems to have lost her artistic license. Instead of using the interesting castle as a basis for the composition, she faithfully reproduced a photograph, including the tourists who happened to get in the picture... Wha? 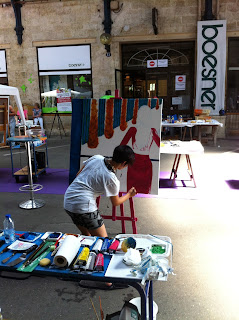 If this woman finished by 5pm it was a miracle. She took an hour to paint the blue pillar on the left hand side. Yes it's a very straight line. But yes, she did use masking tape. Not sure what the hell else is going on here. I will put links up to all the finished pieces when Boesner upload them. 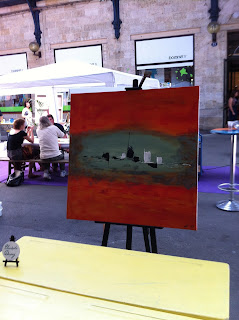 This guy finished painting third. Interesting, but I have to say if it was me I would do more work on it - not sure the colours work. 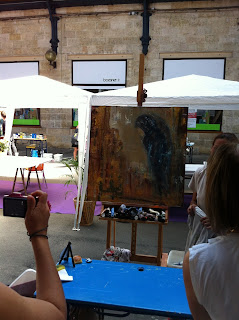 I kind of liked this one - and this is my second choice for winner. Nice and moody hot colours, sufficient vagueness. 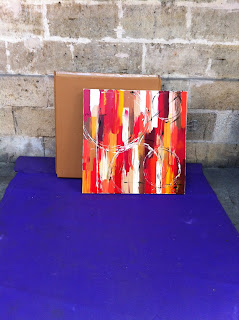 This woman finished 1st. Interesting abstract. She has a show on currently in Bordeaux and her other work looks similar to this - she's adapted her colours to meet the Moroccan theme. I think this is my tip for third place.

So last of course is my painting. Am not in a position to judge, but am reasonably happy with it. My wife says I better win, because she wants a holiday in Morocco. Me too, but I'd take one of the runner up spots which includes hundreds of euros worth of art materials. All these go on exhibit in Bordeaux now, and I gather the winners are announced some time in August. Wish me luck.