My primary colours are red and black. The colours of communism and anarchy. I strive for deep dark blacks, and like to contrast with bright reds. In this painting though I have combined and overlapped different blacks - carbon, ivory, lamp - and different reds - cadmium, vermillion, carmine, crimson. The touches of blue add depth and points of contrast. I paint because I must, but I have such a long way to go. 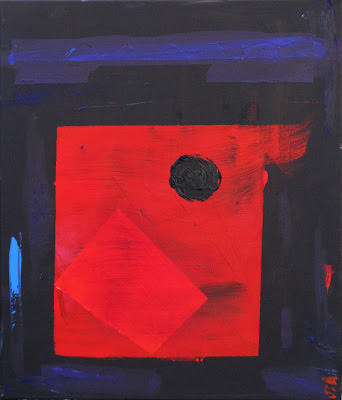 I was in London last week and decided to visit the Tate Britain gallery and take a look at the 2012 Turner Prize show. Often controversial, often interesting, but usually a good way to spend a rainy London afternoon. I took the tube to Pimlico and ignored the signs to the Tate which take you past the extension to Chelsea Art School, preferring to walk along the banks of the Thames. I walked past the old Government Office for London building, and noticed it was being refurbished or knocked down - or perhaps was just Christo's latest piece of art. 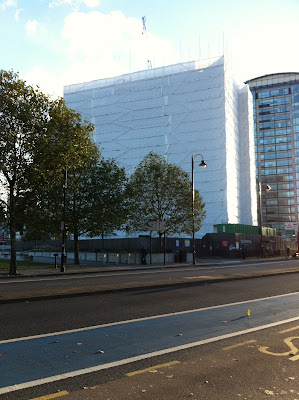 While taking the above photo I was accosted by a Big Issue sales person. I bought a copy off him, and we walked together along the banks of the Thames. He was an interesting man - clearly well-educated, about the same age as me, Irish, and friendly, we chatted about life on the streets, and he told me he was writing everything down with the intention of writing a book. I wished him luck, and we parted ways as we reached the Tate. To get into the Tate Britain nowadays, you don't enter via the Thames, because of building work going on. And in fact the side entrance makes the whole layout deeply confusing, with the "free maps" (£1 "donation" and please give your map back for recycling when you leave) completely unhelpful. I found the ticket office, where they tried to sting me for a further "donation" on top of the £10 ticket price.


Not seen the Turner Prize show this year? Take a look at this film from the Guardian website ("found footage") - everything you need to know is here and you'll save yourself £10 - but take everything Adrian Searle says with a large lump of rock salt:


First there's the "scatological" drawings and sculptures by Paul Noble. Imagine doodling in a notebook with a pair of pencils whilst listening to a tedious lecture. Imagine drawing an imaginary town. Imagine that it looks a bit like lumps of poo so you expand on this theme and make the whole town "poo-based". Yes? Possible to imagine doing that isn't it? Now imagine spreading this doodle across the entire notebook. OK, a bit obsessive, but it's one damn boring lecture. Now imagine spreading that onto  enormous pieces of paper and other pieces of paper joined together so it covers metres of wall space. That lecture must have been unbelievably dull, because that is what Paul Noble's work is like - poo doodles, loads of them. And some poo sculptures. Ho ho. Unfortunately the whole effect is... boring. There is nothing to excite the imagination - the drawings have no great aesthetic appeal, and are not so technically marvellous you are in awe. There is nothing there of interest - just something Paul Noble doodled whilst he couldn't think of anything better to do.

Moving round the show (in the order you see it, not the way Adrian Searle presents it) the next thing you see is photographs and film by Luke Fowler. The photos are all two photographs side-by-side - images clashing, complementing each other (I guess is the effect intended). However there's a couple of problems: they aren't very good - not bad exactly, just nothing exceptional - and they are poorly mounted and framed. The connection between the pairs of images is often obscure - and, anyway, the images just aren't interesting enough (not well composed, not interesting subject matter, not well produced). Hmm. It emerges (see the film above)  that there is a theme about mental health in the photos - but it isn't clear, and the photos are not engaging enough to draw you in to examine them at any length. So on the theme of mental health the next thing to see is the 93 minute film about R D Laing. If you haven't got a life to lead. Anyone who sat through the entire 93 minutes of that film deserves an award. The only person I can imagine sitting through it actually, is Paul Noble: who would use the 93 minutes to do some of his poo doodling. It's a shame: R D Laing is an interesting subject - but this isn't an interesting film. The need to be artistic seems to outweigh any need to engage an audience. There really is an issue with artists making films - and I'll come back to it in a moment.

Next along in the exhibition is a display :"about the artists" and about the galleries that represent them (who stand to make a lot of cash for having their artists chosen for the Turner Prize). This isn't very enlightening, and so i naturally moved on to the next artist, Elizabeth Price. Adrian Searle describes her work perfectly: it is a series of three short, related films about a fire in a Woolworths in Manchester in 1979. The film links together archive footage with added captions, diagrams, annoying loud click sounds and other stuff in a technically able way that leaves you with an end product that fails to engage.  I am probably very stupid, but what the hell was this about? A fire that killed 10 people 33 years ago. And? The scandal of how inflammatory furniture was at the time? I haven't got a clue. The desire to produce something overtly "arty" completely overwhelmed any possibility of informing, provoking or entertaining.

And this is the problem with film. We all see film all the time on TV, at the cinema, on our computers, laptops wherever. We are all very film-litertate. A lot of the film work we see is crap (X Factor) but a lot of what we see is of very high quality - whether it be Hollywood, a TV show or even an ad or a pop video. What then does an art film have to offer that is different and interesting? That is, a film outside of the normal context we see film, placed in a gallery setting to do whatever it is art does.  I don't know - and the reason I don't know is that I have never seen an art film that succeeded in doing so. I may have missed something - but the two art films in this exhibition only succeed in proving my point. By trying to be something different, they only succeed in being something that isn't visually or artistically interesting.

Finally we come to Spartacus Chetwynd. Hmmm. I went to art school between 1980 and 1983. At that time little Spartacus was only 7-10 years old. (She was actually called Alalia then - I know, I know, you are SHOCKED that Spartacus isn't her real name). Some people at my art college, Wolverhampton, in those days were doing the type of thing Spartacus does here. Look her up on Wikipedia and you find this quote: 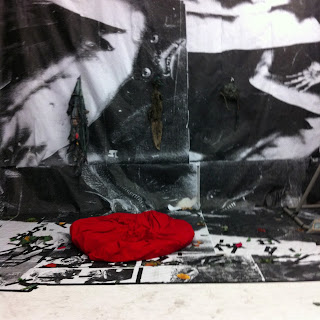 So in all I found the whole show depressing. In previous years there have been some talented artists nominated for the Tate Prize. None of the artists in this exhibition showed any talent I could admire or enjoy. It reminded me of going to a very bad art-school degree show - one where nobody got anything better than a 2:2. So what does this say about the "art world"? (Apologies for over-use of inverted commas and italics). Take a look at the American TV Show - "The next great artist" or whatever it's called - on Sky Arts. This tells you all you need to know. Because it isn't about the artists - it's about galleries and curators (and critics) who are so much up their own arses they wouldn't know a piece of decent art if they were bashed over the head with it. This is about fashion, not art, about power in the art world, and about, as usual, money. The artists are nominated by the galleries who represent them, and are shortlisted by a committee of judges - all from private galleries, except the director of the Tate.

Speaking of money, there's £10 I'll never see again. I wish I'd given it to the guy who sold me the big issue, rather than encourage the poverty of creation I'd seen here.


So to cheer myself up, I went upstairs at the Tate Modern and looked at the Howard Hodgkin retrospective. Unfortunately a very small exhibition - but some damn nice paintings. And free to view.