Banned for protesting against genocide!! 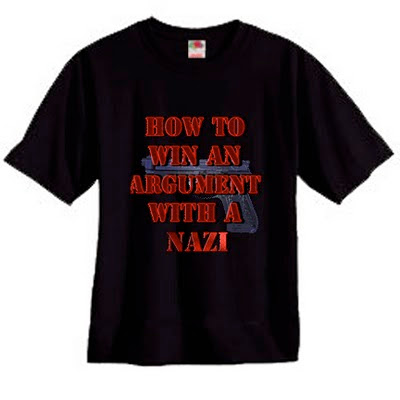 I woke up this morning to discover I have been censored and banned. Yesterday I uploaded two works that I loaded here ('Profiting from genocide is evil' and 'If you tolerate this') onto RedBubble. As I  note on this blog, these two pieces were created in response to my fury that RedBubble is continuing to publish and sell work by HipsterHitler, a New York-based pair of idiots making money from selling offensive T shirts.

HipsterHitler, and subsequently RedBubble, are profiting from genocide. You may think this is an over-reaction, but I challenge this. Whilst HH was only producing comics as he (they) says (say) "parodying" stuff - well fair enough, even if lacking in taste. But selling T shirts with the offensive comments on them as they do is over the top. I understand they are the T shirts that their 'character' in their cartoons wears - but that's exactly it: on one hand in their cartoons they appear to understand how appalling it is to go around with a "Death Camp For Cutie" or "Eastside Westside Genocide" T shirt, and therefore stay within the reasonable grounds of parody - but once they start selling them (and RedBubble too) then they are as bad as the person they claim to be parodying.
It is clearly no longer "ironic"  - you only have to read the forums on their own website to see that, and look at the 'parodying' anti-semitic shite there. RedBubble clearly has some very odd 'libertarian' views which are unsustainable under intelligent examination because they fail to understand what racism is (there is NO debate unlike they think) and fail to understand what is and what is not offensive.
To be more concerned about defending a sicko who thinks "Hitler had a view that needs to be heard", (this is one of the reasons I am told I am banned for - suggesting that the person who said this needs some help) than worry about how HipsterHitler's work offends people is bizarre. RedBubble knows how many of its users are upset, and they are taking a completely unjustifiable stand. As well as removing my comments on HH's work - which all said "profiting from genocide - shame on you", my journals I wrote protesting about HH's work were removed, and most unjustifiable of all three of my artworks have been censored including the two previously mentioned works and the picture here on a t shirt (no I wasn't selling it).
By removing my journals, by removing my protest art RB is acting in a way no better than a fascist state - China's actions on the internet come to mind. I don't understand their viewpoint - but I don't have the power to censor it. But HipsterHitler's work is being published and sold worldwide on RedBubble - and whilst it is not against the laws of the USA where RB is based, it is on the borderlines of law throughout Europe, and in Australia.
Since RedBubble have made the decision to censor my work which protests against profiting from genocide (bizarre) I no longer wish to have my work published on RedBubble, and so have requested they remove all of my work. I will continue my campaign against HipsterHitler however, and against RedBubble and HipsterHitler's selling of their offensive works.
Posted by David Abse at 11:18